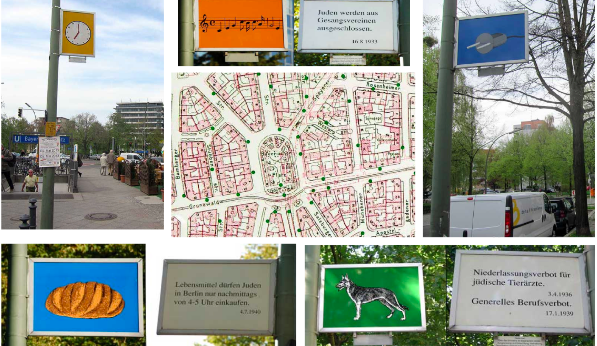 Antisemitism has recently reared its ugly head on college campuses around the US. Even the liberal bubble of Wheaton has witnessed harmful anti-Semitic activity. This past semester, Fall 2019, there were multiple cases of swastikas drawn in dormitories. Sadly, they were not isolated events. Antisemitism plagues campuses everywhere. Symbols such as the swastika come with the historical baggage of genocide. They are attacks revealing a disturbing insensitivity about the tragedy of the Holocaust and the genocide of millions of Jewish people.

These senseless acts made me think of the thousands of memorials, museums, and monuments around the world that have been built to remember, reflect, and memorialize the Holocaust. Their purpose is to ensure we never forget or repeat these tragedies. Additionally, they resist a whitewashing of the harsh realities of the Holocaust, so that the public understands the inexcusable nature of anti-Semitic acts. Some of the most effective memorials don’t announce themselves as a separate, special site to visit. In fact, they are embedded within everyday life. This idea informs an especially powerful Holocaust memorial, Orte des Erinnerns or Places of Remembrance (1993) in the Bavarian Quarter of Berlin, Germany.

Places of Remembrance was created by Renata Stih and Frieder Schnocl [Figure 1]. Their design was entered into the Holocaust Memorial Competition in Berlin, Germany in 1991 (1). This competition originally called for a central memorial in Berlin. However, Stih and Schnock’s design proposed placing eighty signs on lamp posts around the Bavarian Quarter in Berlin (2). Their unconventional idea for a decentralized multi-location memorial won the competition, and was installed in 1993 (3). Each sign displays one of the hundreds of actual Nazi rules and regulations that stole the freedoms of the Jewish people in Berlin [Figures 2, 4, 6]. These rules included; ‘Jews are banned from choral societies,’ ‘Jews aren’t allowed to leave home after 8pm,’ ‘Jews must forfeit all electrical devices,’ ‘Employment ban for Jewish actors and actresses,’ and ‘Jewelry, items made of gold, silver or platinum, and pearls belonging to Jews are to be turned to the State’ (4). The placards effectively recall how hatred became a visible part of everyday life in Berlin.

Located on the other side of each sign are colorful and simple pictures. Each picture corresponds with the freedom taken from the Jewish people. These pictures have been compared to images in a children’s book, or on a board game. The bright colors and simplicity of the images on the signs grab the attention of those passing by. Additionally, the simplicity of the images juxtaposed with the harshness of the regulations create an interesting dynamic, emphasizing the senselessness of the persecution of Jewish people. Places of Remembrance reminds its audience to never forget the regulations that systematically stole jobs, lives, and basic human rights from Jewish individuals. They were the first step towards annihilation.

The decentralized nature of Places of Remembrance means its multi-site status is a crucial part of how the memorial works. Stih and Schnock are devoted to making art that forces viewers to experience their surroundings in an active rather than passive manner (5). In their artist’s statement, Stih and Schnock stress the power of art when it intrudes on everyday life (6). Additionally, Stih and Schnock emphasize the idea of making history visible, and studying the relationship between society and art (7). With this in mind, their technique of creating a decentralized memorial was a tactic to ensure that the senseless treatment of the Jewish people intrudes into the space of those living everyday life, infiltrating consciousness, to ensure its remembrance.

All 80 signs are located in Berlin, the place where the rules and regulations against Jewish individuals came into effect. Specifically, all signs are within Schoenberg which used to be called ‘the Bavarian Quarter’ during World War II (8) [Figure 3]. During the war, the Bavarian Quarter served as an un-official ghetto, where Jewish peoples were forced to live before deportation (9). According to Stih and Schnock, they were concerned that history of confinement of Jewish people in this quarter would be forgotten by today’s residents (10). As a reminder, below each sign, there is a smaller tag that reads, “Remember – In the Bavarian Quarter: Marginalization, loss of rights, expulsion, deportation and murder of Berlin Jews from 1933 to 1945” (11). This provides a culturally significant context to the placement of each place of remembrance. By focusing the majority of the signs within the Bavarian Quarter, Stih and Schock have made the history of this location visible again.

During the 1990s Germany’s government went through major reforms. This period was focused on reunification, as well as coming to terms with their past. Part of confronting this past was memorializing the lives that were lost in the Holocaust (12). Stih and Schnock’s memorial was erected in 1993 in the middle of this painful and complex political process. While some people were trying to move on from the past, Places of Remembrance ensures that the discrimination and murder of the Jewish peoples of Germany and around the world is still recognized.

Most Holocaust memorials memorialize the entire tragedy in one large piece of work, in one site. Places of Remembrance is different from other Holocaust memorials due to its focus on the systematic oppression of the Jewish people, that led to genocide. Rather than focusing on human forms, names, or dramatic structure, Stih and Schnock highlighted the apathy that lead to the dehumanization of Jewish Germans (13). Stih and Schnock ensure that viewers of understand that the Holocaust did not begin overnight. It was rather the banal and everyday oppressions that took place over many years, and could have been stopped on many occasions. The fact that the memorial uses the everyday vernacular of the street sign suggests the willing participation of the German population. Places of Remembrance is not just about the the Holocaust, since it highlights the societal acceptance that eventually escalated to genocide.

The power of Places of Remembrance stems from its decentralized nature, the way it seamlessly mixes with other contemporary street signage. Traditionally, a memorial is a place to go, to mourn and remember (14). Places of Remembrance is not a central destination, removed from everyday life, for people to think and contemplate. By creating a memorial within the very fabric of the city, Stih and Schnock have ensured that history intrudes on our everyday life, not just when and where we choose to remember. They steadily focus on the question ‘How could this ever happen?’ (15)

Places of Remembrance was controversial when it was first installed, due to a lack of understanding, and to the continuing presence of anti-Semitism in Germany. In an interview, Stih and Schnock described several incidents that occurred during the installation. For example, while installing signs, the artists were confronted by police multiple times because citizens thought they were displaying anti-Semitic propaganda (16). Additionally, the two artists and their two assistants were verbally harassed by pedestrians who shouted, “Go away you Jewish pigs” (17). Stih and Schnock state that the two workers helping them install the signs had asked why they were so important if they display statements that ‘common sense’ declares wrong (18). Of course these workers were shocked by the display of anti-Semitism, and then understood the importance of the project.

While the installation process was filled with misinterpretations and protest, over the years the memorial has created landmarks for the locals. In their interview, Stih and Schnock state their excitement when residents tell them which sign is by their house, and which ones they see every day (19). This reaction from the local population shows the success of the memorial, to become part of the lives of their viewers.

While popular with locals, Places of Remembrance is often misunderstood by tourists. Some are confused by the signs because they are written in German. Still others have believed the signs were an act of contemporary anti-Semitism. Stih and Schnock are combating this problem by introducing English, Spanish, French, Russia, and Hebrew translations of the signs (20). However, some tourist travel to Berlin just to see the Places of Remembrance. The memorial is known to tourists as a local secret, and offer an alternative scavenger hunt (21).

While the Places of Remembrance has not always been accepted by the public, the signs have performed their duty of capturing the attention of those who walk past, reminding them that the systematic oppression of the Jewish people is very present in their history, and must not be forgotten or repeated.