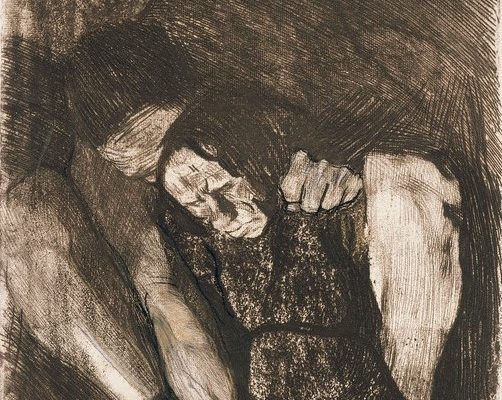 Since the 14th century intaglio printing processes have allowed artists to innovate and experiment with different techniques through the flexible nature of the process. Numerous artists have experimented with the different qualities of intaglio prints, but few have been truly innovative in creating their own combination of techniques.  German artist Käthe Kollwitz is an example of a print maker who constantly experimented with different printing techniques, sometimes of her own design, to create images whose technical styles are innovative but also convey symbolic meanings. Käthe Kollwitz’s Inspiration (1905) [Figure 1], which is part of the Wheaton College Collection, is a work in which Kollwitz combines different intaglio printmaking techniques which all work in unison to create a image whose rough physical texture of lines illustrates the harsh, rural life of the peasant women being depicted.

Inspiration was initially intended to be part of a series of prints titled The Peasants’ War. The series narrates the German peasant outbreak of 1525 lead by Black Anna where they rebelled against the oppressive systems of serfdom and feudalism.  The outbreak was unsuccessful and the peasants were brutally repressed, but it was marked in history as a moment when the will for a better life and rebellion against an oppressive system ignited physical force. The seven images that make up The Peasants’ War narrate the abuses of the feudalism system on the peasants, the leader of the rebellion Black Anna taking initiative to rebel, the battle scenes and eventually the sad fate of the peasants. Inspiration was omitted from the series and replaced with the angsty Whetting the Scythe (1905) [Figure 2]. Kollwitz omitted Inspiration because she wanted the series to reflect the raw human power of the peasants, but adding an allegorical figure, which depicted the power and inspiration for the rebellion, was no longer in the hands of humans, but rather was a greater cosmic force (1). Even though Inspiration was not included in the final series, it is still a crucial piece for Kollwitz’s experimentation with intaglio techniques. By further understanding Kollwitz’s use of technique we will be able to see the how she uses them to enhance her metaphors.

In Inspiration, Kollwitz employed three different intaglio printmaking techniques: etching, aquatint and stippling. Etching is a chemical process where lines are drawn onto a metal plate that is covered in a mixture of substances called ground, and then soaked in a chemical bath where the chemicals react to the unexposed lines and create the etching. The technique of etching allows artists to be more flexible and make more mistakes in their drawings because corrections can be easily fixed by covering unwanted lines with ground. Because of the nature of etching, the produced lines appear blunter in comparison with drypoint or engraving. Aquatint is a process often used in conjunction with etching and with the same basic procedure, but it is more concerned with producing half tones. Instead of drawing lines onto the plate, asphalt dust is exposed to the plate at different stages and densities during the chemical process so that the tone of the plate is varied. Aquatint is typically used with etching because it creates a print that combines textures of lines and tonal variation. Stipple engraving is also an adaption of etching techniques. In stippling, numerous dots are incised into the ground to create design and texture, in contrast with traditional etching; this process is a completely different way to build up an image, it uses the buildup of dots rather than lines to create the image.  These types of prints, which provide flexibility to the artist, are critiqued because of the blunt, course lines they produce. Instead of shying away from these inherent qualities of etching, Kollwitz uses them to her advantage to create a complex and powerful image (2, 3).

Inspiration depicts Black Anna being inspired by an allegorical figure to pick up a scythe and begin the attack on her oppressive world. These two figures encompass the entire space of the large-scale print. The allegorical figure is positioned behind Anna, with its legs bent straddling her back as it hovers in the air through its wings. The figures entire body works to grip in Anna and demonstrates the control that the figure has over her. The arm that reaches for the scythe crosses Anna’s body parallel her constraining her upper body; this placement of the arm conveys the physical strength and in turn mental strength that the allegorical figure has over Anna.  The second arm rests on Anna’s shoulder; the allegorical larger than life hand further illuminates the physical grip it has over her.  The lower legs of the figure, which clasp Anna’s body, shows further constrain and almost a metamorphosis into each other. We do not see the face or the body of the allegorical figure and its arm that crosses Anna’s body, as it blends in with and controls hers; these attributes suggest that the allegorical figure is a metaphorical extension of Anna rather than its own being.   However, different uses of line, light and texture fundamentally differentiate Anna and the allegorical figure, making Anna appear more dark and rural. Anna’s body, aside from her face, is done in stippling etching. This is seen through the array of small dots covering her dress. The variation of thickness and layers of these stippling dots change the tone of her body, which creates shadowing and emphasizes that the scene is taking place in the dark of the night. This perception of light and dark works to emphasize the areas of importance in the narrative. The print is primarily covered in black inked lines, so that lighter areas stand out. The allegorical figure has lighter and less dense lines, because the print as a whole dark, this light stands out from the dark background of the print. Attention to detail through line and lighting is also seen in where the allegorical figure is whispering into Anna’s ear and where it is guiding her hand to the scythe. In both of these places, the texture and shape of the line change to convey detail and to make the area less dense so that we are drawn to these two places of importance. The hands and face conjoining appear to be the places of central importance within the print. The allegorical figure is whispering into Anna’s ear, mentally igniting her to rebel. As our eyes move from their faces down their bodies, the next point of focus is the figure’s hand guiding Anna to the scythe, where the metal intent of the allegorical figure manifests into physical power through Anna. This sense of transformation of power is a central theme in Inspiration. However, if you look closely at the texture of line, it embodies a rough style that is complex yet still reminds us that we are looking at an image of rural peasant life.

In Inspiration, Kollwitz does not try to hind the fact that we are looking at an etching. The shape and texture of her lines are not hidden or disguised; they are stark, visible and bold. The etched lines are seen mostly in the allegorical figure and parts of the background. These etched lines are almost like groups of stripes flowing in different directions. The definition of these lines and the way they overlap one another also insinuates the texture of a rough woven cloth. Garments made of rough unrefined materials are associated with the bad conditions and the peasant class.  By associating the surface texture of the print with visual signifiers of the peasant class, Kollwitz reminds us that we are looking at an image of peasant life and the poor conditions that they attempted to rebel against. Inspiration is not the only image from the series that conveys this woven texture; it is rather a thematic quality among The Peasants’ War. For instance, in Outbreak (1903) [Figure 3] this woven texture is seen in the lines that make up the sky. This cloth like texture is not only used to convey peasantry in each individual print, but it connects the series together by creating a common stylistic texture that speaks not only to each other but to the broader narrative of peasant inequality.

Käthe Kollwitz inspired hope and determination in her Peasants’ War series. She sided with the peasant rebellion by creating a series of images that documented their great attempt for equality. Kollwitz was able to convey a peasant life in such a compelling way through her use of printmaking techniques. In Inspiration Kollwitz uses the rough qualities of etching to her advantage, not only to create a print that employs an advanced knowledge of intaglio printing techniques, but that resonates the raw and unrefined life that the peasants were rebelling against.