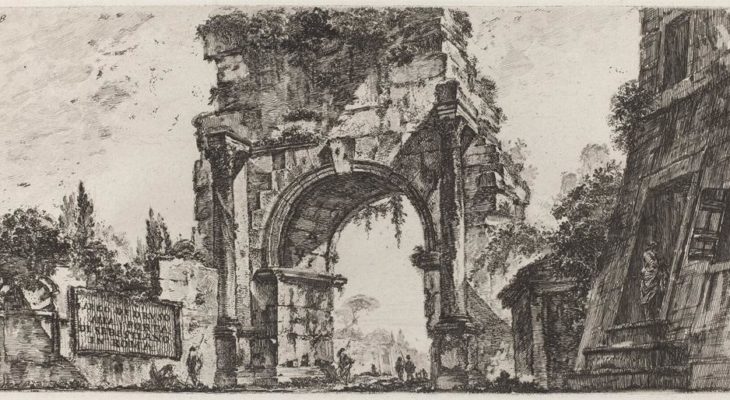 Emily Swalec (Class of 2014) conducts a visual analysis of an eighteenth century Piranesi etching in the Wheaton Permanent Collection.

This essay was completed for ARTH 111: Arts of the Western Tradition in Spring 2011. It was originally published on January 9, 2012.

Arco di Druso a Porta S. Sebastilano in Roma, Plate VII is an 18th-century etching by Giovanni Battista Piranesi [Figure 1].  The print depicts an ancient arch flanked by a wall to the left and a shed and large structure with an open door on the right. Several figures can be seen sitting by the arch and walking beneath it. Despite the relatively small size of the 5.25 inch by 10.56 inch print, Piranesi creates a sense of awe around the arch and draws viewers to the structure that originally welcomed people into the city of Rome.

The composition of the etching emphasizes the arch as the focal point in the center of the print. The image is nearly symmetrical, with the wall to the left and the building to the right balancing the central arch. The columns and plants atop the arch create a sense of verticality and draw the viewer’s eye up. Conversely, the wall to the left is horizontal, and Piranesi creates a subtle sense of horizontal lines in the structures on the right.  The small shed, the figure in the doorway, and the window sill are approximately level to each other and to the wall on the left. The wall of the building on the right is drawn with a diagonal line rather than a vertical one.  Despite the structure’s height being equal to that of the arch, the arch remains the only truly vertical architecture in view, and thus the dominating image.

The small size of the etching invites the viewer to peer more closely to witness the detail of the lines Piranesi has skillfully used to construct the scene. Although Piranesi uses a variety of lines throughout the etching, each element of the composition is primarily dominated by one type of line: short and curved for the vegetation, thin, delicate, and flowing to make up the sky on the left, and densely drawn, thick, vertical lines for the building on the right. However, this pattern of associating one type of line with each element of the etching is broken when the viewer looks at the arch.

Within the arch, Piranesi incorporates a wide variety of lines to encourage the viewer to closely analyze the structure.  There are curved horizontal lines up the length of the columns, short vertical lines emphasizing the shape of the pedestals, and curved vertical lines to create visual texture in the columns and bricks.  Even within small areas of the arch, Piranesi uses several types of lines: an individual brick on the top left of the arch incorporates short lines resembling dots amid thick and thin curved vertical lines to create a sense of shadow and texture.  This high level of visual detail is not seen in the elsewhere in the image and further works to make the viewer focus on the arch at the center of the image.

Piranesi also uses the lines within the arch to create a sense of light and contrast not seen elsewhere in the etching.  Dense, thick lines depict shadows beside the left column, beneath the arch, and under the vegetation on top of the structure.  These shadows contrast with areas of very little detail, such as the top right corner of the arch, where the viewer can imagine light striking the impressive architectural structure.  The density and thickness of lines also creates a sense of depth in the etching through atmospheric perspective.   The trees and wall visible beyond the arch are made up of thinner lines which gives the impression that they are located far past the arch.  Because the background is more difficult to see without looking closely, Piranesi uses it to draw the viewer’s eye to the arch and beyond. One can imagine that the way the viewer focuses on the arch is very similar to the way the arch originally drew visitors into the city. Piranesi has illuminated the Arco di Drusa’s original purpose and proven that it will continue to invite viewers in for centuries to come through his etching.