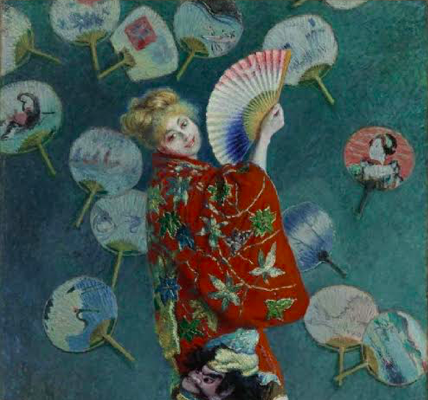 Claude Monet’s La Japonaise (1876) depicts his wife Camille dressed in a Japanese kimono (uchikake) posing against a wall adorned with Japanese fans [Figure 1]. This Impressionist painting speaks to the growth of Japonisme, a cultural phenomenon that swept through France in the years following the 1854 opening of Japanese trade routes with the West. Newly-imported Japanese good, especially prints, inspired artists such as Monet, Vincent van Gogh, and Edgar Degas, who began borrowing Japanese ideas into their own work. Appropriations were not just limited to the art world, however. An obsession with all things Japanese was seen in the commercial world, as well, in fashion, travel, and entertainment (1). While most paintings categorized as Japonisme reveal stylistic elements of imported Japanese woodcuts, La Japonaise speaks to this more commercial side of France’s fascination with the East.  Non-artists, like Camille Monet, joined in on the Japonisme trend following the first Japanese pavilion at the Exposition Universelle in 1867, which provided many visitors with their first experience of Japanese theater and Japanese clothing (2). In the following years, French women adopted the kimono into their wardrobes and department stores began selling them to meet the demand. By the early 20th century, advertisers followed suit by using exoticizing fantasies about Japan in advertisements to sell products ranging from perfume to bicycles (3). Madame Monet’s portrait reflects the transition of Japonisme from a primarily fine arts strategy to a mass cultural phenomenon and anticipates the strategies advertisers will use in their depictions of supposedly authentic Japanese culture.

In Monet’s La Japonaise, Camille Monet wears a heavily embroidered red Uchikake, and twists her shoulders forwards to engage the viewer seductively with a smile. Monet purchased the kimono for her in 1867 likely as a souvenir replica of one they may have seen worn in a kabuki play at the Exposition Universelle that same year (4). She fans herself with a simple red, blue, and white folding fan. Uchiwa fans adorn the wall and spill across the ground beneath her. The room she stands in is otherwise very plain; the gray walls and the neutral white carpet allow for the bright kimono and colorful fans to stand out against the rest of the room. The gown is decorated with maple leaves that spread down her shoulders. The warrier Taira no Koremochi from the 1516 play Momijigari is sitting beneath the tree, withdrawing his sword from its sheath (5). He is placed just at the curve of her twisting body so that his gaze falls at her posterior, setting up the warrior as a kind of voyeur. This sexual drama is further suggested by the position of the phallic sword, evoking a role reversal in which Camille Monet, with the power to co-opt Japanese culture, is also being objectified by it (6).

On the wall to the right of Camille a red uchiwa shares the same color as the robe, and thus stands out among the crowd, as the other fans share a dominant color scheme of blue and white. This fan depicts a Japanese woman in profile with her hair up and perhaps a fan to her chest. Her details are partially obscured, but we can see her turning her head left in Camille’s direction. The central drama of the painting lies in this exchange of gazes between three actors—the delicate Camille Monet, the powerful warrior, and the stoic woman—which also creates a tension between male and female and French and Japanese characters.

Key characteristics of Japanese woodcuts borrowed by French artists include a flattened picture plane, bold color palette, dramatic cropping of the composition, and exaggerated figures (7). Monet, however, is not emulating these techniques in La Japonaise. The square-pattern of the carpeting deepens the space of the picture, a sign of Monet’s reliance on a more traditional use of Western perspective. He does, however, incorporate the woodcut tradition of bold colors. One observer even commented that the bright red resembled a gunshot which would hurt an observer’s eye (8). However, this only applies to the kimono. Otherwise the painting is dominated by fairly neutral colors. Monet is not engaging with the formal strategies of Japanese woodcuts in the same way that his contemporaries were, or how he himself would in later, more abstract works. This portrait instead reveals the pervasive presence of Japanese culture in everyday life.

Although much of what stands out about this painting are the vibrant Japanese textiles and fans, Monet took pains to emphasize the European identity of his subject, especially via Camille’s blonde hair. In dressing for her modeling sessions, she did not only adorn a kimono, white face powder, and sensu fan, but she also wore a wig. Camille’s normally dark hair was replaced with a blonder shade in order to give her a more distinctly European appearance (9). While we can only guess at Monet’s intentions, it does suggest that he wished to emphasize an obviously European woman in costume, revealing how Japanese goods became a fashionable way to perform exoticism.

This theme, of a clearly European woman transformed by Japanese accessories, is a fairly common one in French advertisements of the period, where it is accompanied by not so subtle messages about French superiority over Japan. The visual meaning of scattering the fans below Camille’s feet, brushed aside by the Uchikake, evokes the feeling that the French woman adorned by Japanese fashion is disinterested, disrespecting, and unaware of the actual culture. Even her posture reveals a lack of understanding. The S-curve of her body emulates many depictions of actual Japanese women wearing uchikake. However, in Japan, women often simultaneously wore a few of these robes and it is the layers that create the silhouette of the curve and the bell shape at the bottom. French women performing a “Japanese pose,” perhaps misunderstanding this, tended only to wear one kimono to mimic the posture they saw in Japanese women (10). We see this in fashion advertisements, like the one selling kimonos at the Babani Fashion House [Figure 2]. Here a French woman, with flowing light hair, creates that same S-shaped curve that Camille adopts, as she fastens her kimono’s belt and gazes into a mirror being held by a subservient Japanese girl. The French woman looks down at the mirror and seems to see past the girl beneath her. The relationship between French and Japanese characters in both La Japonaise and the Babani Fashion House advertisement demonstrate the assumption that Japan serves European consumer fantasies.

Other early 20th-century advertisements tell a similar kind of story. While the Babani image promotes a fashion trend, perfume advertisements used exoticism to depict presumably Japanese subjects in Westernized versions of their culture. In an image for Amaryllis du Japon we see a woman wearing a red kimono and Geta sandals, with hair drawn up in a high bun held by intersecting red pins, bending down to smell flowers in an elegant blue-and-white vase, reminiscent of the kind of Japanese ceramics making their way to French homes [Figure 3] (11). The image is loaded with metonyms for authentic Japanese culture. She even holds a Japanese parasol, an entirely unnecessary, almost farcical prop, since she seems to be indoors. While at first glance, it appears to depict a Japanese woman, she it also not too Japanese. Her facial features are ethnically ambiguous. It is entirely possible that like Camille, she is a European woman performing à la Japonaise. In this way, the image can potentially appeal to a French viewer by offering the potential fantasy of adopting a culture via its props. In the end, however, what marks her as Other is the insistence on her sexual availability, conveyed via a pliant, bending pose that emphasizes both her rear and chest, revealed via a plunging neckline. The model serves to embody a French fetish for all things Japanese.

Another perfume advertisement for Kanaga Water also crosses cultural boundaries; this time primarily through language [Figure 4]. The image depicts a woman in a very elaborate chrysanthemum kimono, geta sandals, and floral headpiece standing before a mountain landscape. The text reads, “Japan Kanaga Water” at the top and “The only genuine V. Rigaud. Paris. France” at the bottom. There is also text in Japanese characters in the upper left, which presumably lends authenticity to the product being sold. It translates as “Japanese Flower Woman Perfume,” but given the anticipated French readership, the information it provides is not essential. The use of two languages, however, does speak to the blending of cultures, which is a consistent theme in Monet’s La Japonaise. The visual parallels between the Monet and the Kanaga water advertisement also extend to the positioning of the central figures. The Kanaga woman holds a branch of flowers to the side of her face much like Camille holds the fan. Their bodies both twist, breathing motion into the kimonos. Even the structure of the floors with their checkered grey and white squares unify the two images. Where Monet mixes Japanese fashion and decoration with French figure and aesthetics, the Kanaga ad blends Japanese language and aesthetics for a French market.

The story that each of these posters tell, as an extension of ideas we find in Monet’s La Japonaise, is the story of an expanding world in which fascination with foreign cultures leads to appropriation. Blending traditions and heritages can be a positive celebration of diversity, but in these examples, Japanese culture is seen superficially, as a novelty interest to French culture, which is unquestionably the superior.  In his painting, Monet revealed how an interest in Japan had already penetrated consumer markets and the work anticipated the strategies by which advertisers would also attempt to sell fantasies about Japan.